As much as I enjoy X Factor, ever since I’ve become a follower of Sweden’s Idol series, which always occurs at the exact same time of year, my enjoyment has been a little tainted. The very direct comparison with Idol makes it especially clear what is wrong with X Factor and it really summarises why Sweden is so much better than the UK overall. Although I love watching Idol, it actually makes me a bit depressed to not be in Sweden. I love the drama of X Factor, the potential for its winners to become properly huge stars, and the fact that I can discuss it with all my friends, but in so many other ways it simply cannot compare to Idol. To explain why I love it so much, here are the top 10 best things about Idol… 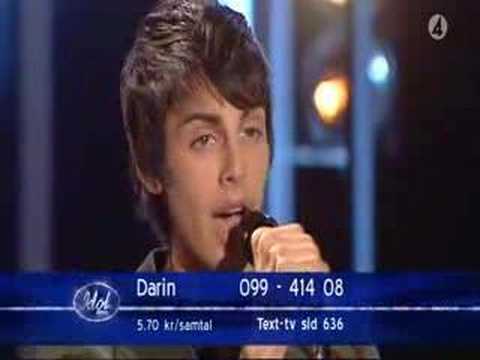 1. The alumni
Since Idol began in 2004, I’m pretty sure that more of the ace popstars who have arrived on the Swedish pop scene have been Idol alumni than not. Darin, Sebastian, Amanda Jenssen, Agnes Carlsson, Kevin Borg, Alice Svensson, Ola, Måns Zelmerlöw, Danny Saucedo, Sibel, E.M.D, Anna Bergendahl, Tove Styrke and Rebound! are just a selection of the amazing popstars to have come from the show. With each series producing the biggest stars of the year ahead, Idol is totally unmissable for any true fan of Swedish pop. If you want to see the stars of the future first, you have to watch Idol.

2. The beautiful Swedes
Every year I fall in love with at least one beautiful boy on Idol. On X Factor there are good-looking boys, but they’re always a bit blandly so – not the case on Idol. Favourites over the years include Nicklas Hocker, Eddie Razaz, Lars Eriksson, Christoffer Hiding, Darin, Ola (when he’s not resembling Andrew Stone) and of course Måns Zelmerlöw! There are plenty of gorgeous girls too, if that’s what takes your fancy.

3. The variety of styles and personalities
Unlike X Factor, Idol seems to attract a genuine cross-section of Swedish young people. If you walked around Stockholm looking for people interested in becoming famous singers, you would get the same mixture of musicians as turn up to the Idol auditions. Because successful contestants have been given the freedom to do what they like after the show, and there are ‘credible’ acts such as Amanda Jenssen among the Idol alumni, there is not as much snobbery around the show as X Factor. Of course Idol’s not the height of cool in Sweden but the variety of interesting performers who turn up proves that the Swedes are far more open-minded than the Brits about TV talent shows.

4. Likeable contestants
I always have my favourites on X Factor and there have been a few, such as Joe McElderry and Same Difference, who I’d love to call my friends. However, there are far more I wouldn’t even want to be in the same room as. The Idol contestants are always a much more interesting bunch – from last year alone, I’d have loved to get to know Mariette, Tove, Nicklas and Eddie. Even the winner Erik, whose musical style put me off him as an artist, still seemed like a really sweet and fun person. It’s all just one big reminder of how much more interesting and likeable Swedes are than the British. When’s the next flight to Stockholm?

5. Great song choices
To fit with the ‘contestants should just be themselves’ general attitude of the show, it is quite common for them to choose songs which have not been a hit or in many cases not even been released as a single. This makes the song choices way more interesting than the same old boring ‘classics’ that X Factor contestants are forced to perform, especially as it allows the singers to create their own musical identity and not always be in the shadow of the song’s original performer. It’s also always exciting when they do Swedish hit songs that are unknown in the UK – last year two people sang Hurtful by Erik Hassle in the same week!

6. Not too many bad auditions
To get to the good bits of X Factor (boot camp onwards) we first have to suffer through the awful first rounds. So far this year I haven’t found anyone particularly worth supporting. However, on Idol the initial audition rounds are much more enjoyable – very few bad auditions (just a selection of funny ones), and they show about 15-20 good people each episode, quite a contrast to the 2 or 3 (maybe 5 if they’re feeling generous) you’ll get on X Factor at this stage. Idol is much more about music than X Factor, but it still makes for good TV as we watch to discover the next amazing Swedish pop talent.

7. A brilliant soundtrack
X Factor actually has a pretty good soundtrack – so far this year, All Time Low, a new Joe McElderry song, and they always make sure to give Alphabeat a few extra £s on the royalty cheque. But simply due to the superiority of the Swedish charts, Idol has an even better soundtrack. Highlights of Idol 2010 so far are BSBs’ Straight Through My Heart and Electric Avenue by Velvet.

8. Judges who know their stuff
Surely the ideal judges for a TV talent show would be people who know about songs, singing and the music industry? You’d never think so from the choices of judges for X Factor (although Cheryl and Dannii are both acetastic, it has to be said) but the Idol judges, or juryn as they’re known, have exactly the right experience to befit their job. All three are well known songwriters, and Andreas was even part of Cheiron alongside the true King of Pop, Max Martin! He has a credit on I Want It That Way – what better qualification could there possibly be for a judge?

9. Fantastic theme weeks
It’s a while yet til we get to the theme weeks, but I remember from previous years how brilliant they can be. In the first series, there was a Max Martin week! A MAX MARTIN WEEK!!!! Other highlights have included Swedish Hits, One Hit Wonders, Current Hits, 90s Hits, Schlager, ABBA and Club Music! It’s worth tuning in each week just to see what amazing idea they’ll come up with next. Maybe this year we’ll get Melodifestivalen, Roxette or RedOne theme weeks? None of them would be surprising!

10. Insight into Swedish culture
The best thing about Idol for me is that it keeps me involved with Swedish culture. Having lived in Gothenburg for a few months in 2007, I learnt a fair bit of Swedish and would like to keep that up so I could potentially live in Sweden again someday. Watching Idol is a great fun way to learn the language and get an insight into Swedish culture, as you’re never far away from a sing-along moment and since the format of the show is so familiar (exactly like every other Idol show) it’s easy to understand what’s going on. If you’re interested in learning more about Sweden, watching Idol is the best place to start.