Following on from yesterday’s post, here are my reviews of a few more gigs I’ve been to recently…

After the amazing United Cube concert last year I couldn’t miss the chance to see 4Minute again, and two new K-Pop acts as well. The concert as a whole was quite surreal, as the pop acts were mixed in with traditional Korean performances, which ranged from bizarre to unlistenable, but were certainly fascinating. The three K-pop groups were all great: 4Minute are like a Korean Girls Aloud, EXO-K a Korean *N Sync (attracting high-pitched screams that took me back to The Wanted gigs) and Norazo, who were as nuts as their reputation suggests, would fit right in on Eurovision.

Marina and the Diamonds at The Tabernacle, 25th June 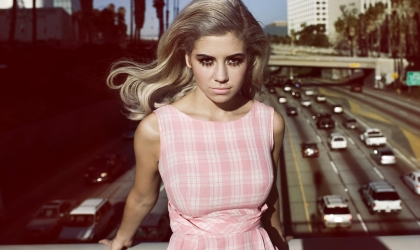 The last time I saw Marina was three years ago, and she’s come a long way in that time! Then it was just her in a skimpy, sparkly outfit supporting Patrick Wolf, and now she has her own show with costume changes, a flashing light backdrop and a toy dog called Marilyn. As both her albums are so consistent, she played all the singles and most of the album tracks too, and every song seemed to be at least someone in the audience’s favourite. Personally, I like her slower songs best, so the section including Lies followed by I Am Not A Robot was my highlight of the night. Swedish singer Faye, a former girlband member gone electro-indie-pop, played her first London gig last night to a small but influential crowd. She has a fantastic singing voice and great stage presence, but I was surprised by how dark and depressing the set was. She performed her single Water Against The Rocks and it was by far the best song, but there were some other good ones, particularly a track called Blonde about mean girls. The rant that preceded it was slightly scary but the song brought back memories of Linda Sundblad’s brilliant old band Lambretta.